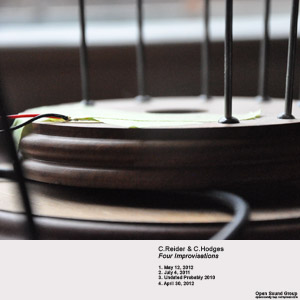 This early 2013 offering from the Open Sound Group is, just as its title rather modestly states, four improvisations by sound artists C. Reider and C. Hodges, performed and recorded at various dates between 2010 and 2012. Throughout, Reider and Hodges employ various combinations of electronic and acoustic sound sources to produce soundscapes of a starkly intriguing beauty.
The first track is an entrancing twenty-four minute improvisation of metal (Hodges) and metal and electronics (Reider). Beginning with the shimmer of echoing metallic sounds, it unfolds into washes of electronic tones spreading out in long cycles. As the piece develops, long and short cycles of sound—grounded in echoes and drones—phase in and out. At the heart of it all are the sonic properties of metal as it is struck, scraped and rubbed. Reider and Hodges leave stretches of space between the sounds in order to structure the piece with a resonant, open architecture. Metal serves as the foundation for the third improvisation as well, with Hodges credited with “shake tines” and Reider with “tall tines.” The emergent sound is reminiscent of irregularly struck bells with long decay times and pauses between soundings. The second track, a pulsing, drone-based piece, has Hodges on guitar and Reider on voice and electronics, while the very brief closing improvisation, sounding like the rush of air through a wind tunnel, is wryly credited to Hodges on “ottoman” with Reider “listening.”
This is a deeply absorbing work of nuance and finely-drawn timbral contrast.
http://archive.org/details/C.ReiderAndC.Hodges-FourImprovisations

Yeah I Know It Sucks
http://yeahiknowitsucks.blog.com/2013/01/20/c-reider-c-hodges-four-improvisations/

C.Reider and C.Hodges live in Northern Colorado in the United States. Here the duo create flowing improvised pieces using various electronic and acoustic objects: small sounds, drone and gentle echoes.
The description is pretty clear and yet rather different from other album descriptions we from YIKIS have come across. Also the detailed track info and where the tracks have been recorded (1 & 2 in the blue room, 3 in the yellow room and 4 in an art lab?) is unusual but very appreciated.
It intrigued me enough to dive into this release that looks on paper more like a science project than that it is important how the music actually sounds. But lucky for our ears, this is definitely not the case.

The first track is absolutely well made and a pleasure to wander around in. This is an improvised peace made by metal and electronics. Don’t think of long haired people with guitars, but in this case they actually mean real metal. The whole soundscape feels like an almost winterish landscape with hints of alienation. Strange sounds that even though highly experimental from origin, they never go to loud or in your face with great disturbance. The music moves like a good story and when I close my eyes an amazing film is being presented in these fine sounds. It feels like friendly aliens have landed somewhere in a remote area of a snowy Alaska, where they are helping out the locals to keep warm by providing unearthly knowledge and machinery. They are absolutely a peaceful bunch as the sounds are very friendly and warm, even though my ears have never heard many of these sounds with my own human ears before. High buzzing, warm low base tones of electronic communications, crisper sounds, echoes of warmth and strange electronic surgery equipment. With its more than 24 minutes play length this track definitely got time enough to create a wonderful and exciting atmosphere of a friendly sci-fi kind.

track 2 is an improvisation between a guitar by C. Hodges and the voice and electronics by C. Reider.
This track is yet highly experimental and sucks the listener into a zone far away from its normal daily life and activities. Warm sounds are hovering your ears up and a rhythmic undertone from possible slapping the guitar is giving our ears comfort while we are floating deep inside this unknown territory. After 4 minutes there is definitely no coming back as the sounds kidnap us with pure beauty. It feels like we have reached a point where an electronic generated didgeridoo has taken over the set, and mister Reider releases its vocal cords to give into his animalistic feelings. The weird thing is that the whole track feels like a mixture of aboriginals from outer space that created traditional space music, and dibbles also in some kind of soup of futuristic mad free jazz. There is something unexplainable about this music as it is just so highly original in its kind, and so very entertaining that the listener should approach these improvisations more as an movie for the mind than just a random release to just plugin while doing the laundry. This is an intensive audio work that is absolutely thrilling to hear and experience. Is someone playing a harmonica at the end to celebrate this magnificent collage?

Track 3 is supplied with the info that it is recorded somewhere probably in 2010 and contains a improvisation of shake and tall tines. To be honest I don’t know what that means. With a bit of help from the booble search engine it could be a possibility that they mean ‘forks?’ or the horns of a reindeer? Well actually I don’t think that could be the right answer and probably isn’t that important too. The music itself is less interesting than the previous tracks as I noticed that my mind was just skipping through pictures of deer’s in their natural habitats. Perhaps it is because the sound goes a bit softer than the earlier improvisations and perhaps lesser variations in the actual soundscape. Perhaps tines are not my kind of thing,

The last track is an weird improvisation that sounds like a fauteuil with wheels is been pushed and pulled over a floor. Perhaps this was an art performance of some kind and created more of an funny ending than an actual story for the mind. That is absolutely fine after all the first 2 improvisations where absolutely of a high quality. With their lengthy lengths they will probably entertain the brain enough, and will make this free release absolutely worth a try.

Uploaded by grahamdunning on January 20, 2013